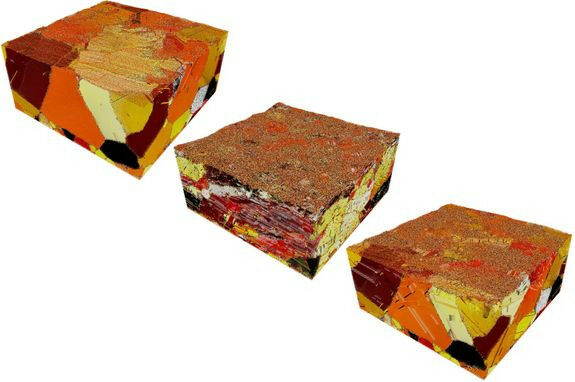 A seemingly paradoxical effect: friction normally causes more damage at higher speeds. But at extremely high speeds, it is the other way around.

When two metal surfaces slide against each other, a variety of complicated phenomena occur that lead to friction and wear: Small crystalline regions, of which metals are typically composed, can be deformed, twisted or broken, or even fuse together. It is important for industry to understand such effects. After all, wear can destroy machinery and cost a lot of money.

Typically, the faster the two surfaces slide past each other, the greater the wear. But at extremely high speeds, comparable to the muzzle velocity of a firearm, this can be reversed: Above a certain speed, the wear decreases again. This surprising and seemingly contradictory result has now been explained using computer simulations by the Research Unit Tribology at TU Wien and the Austrian Excellence Center for Tribology (AC2T research GmbH) in Wiener Neustadt in cooperation with Imperial College in London.

"In the past, friction and wear could only be studied in experiments," says Stefan Eder (TU Wien, AC2T research GmbH). "Only in recent years have supercomputers become so powerful that we can model the highly complex processes at the material surface on an atomic scale."

Stefan Eder and his team recreate various metal alloys on the computer - not perfect single crystals, with a strictly regular and defect-free arrangement of atoms, but an alloy that is much closer to reality: a geometrically complicated arrangement of tiny crystals that can be offset from each other or twisted in different directions, manifesting as material defects. "This is important because all these defects have a decisive influence on friction and wear," says Stefan Eder. "If we were to simulate a perfect metal on the computer, the result would have little to do with reality."

The research team calculated how the sliding speed affects wear: "At comparatively low speeds, in the order of ten or twenty meters per second, wear is low. Only the outermost layers change, the crystal structures underneath remain largely intact," says Stefan Eder.

If you increase the speed to 80’100 meters per second, the wear increases - that is to be expected, after all, more energy is then transferred into the metal per time unit. "You then gradually enter a range where the metal behaves like a viscous liquid, similar to honey or peanut butter," says Stefan Eder. Deeper layers of the metal are pulled along in the direction of the passing surface, and the microstructure in the metal is completely reorganized. The individual grains that make up the material are twisted, broken, pushed into each other and finally pulled along.

The team experienced a surprise, however, when they moved on to even higher speeds: Above some 300 meters per second - which roughly corresponds to the top speed of aircraft in civil aviation - the wear decreases again. The microstructure of the metal just below the surface, which is completely destroyed at medium speeds, now remains largely intact again.

"This was amazing for us and for the tribology community," says Stefan Eder. "But literature research showed us: this effect has been observed by other scientists in experiments - it is just not very well known because such high speeds rarely occur. However, the origin of this effect has not yet been clarified."

More detailed analyses of the computer data have now shed light on how this effect is possible: At extremely high speeds, friction generates a lot of heat - but in a very uneven way. Only individual patches on the surfaces of the two metals sliding against each other are in contact, and these small areas can reach thousands of degrees Celsius. In between, the temperature is much lower.

As a result, small parts of the surface can melt and then re-crystallize a fraction of a second later. The very outermost layer of the metal is thus dramatically changed, but this is precisely what protects the deeper regions of the material: Only the outermost layers of the material feel the wear, the crystalline structures underneath change only slightly.

"This effect, which has hardly been discussed so far, occurs with different materials," says Stefan Eder. "Wherever friction occurs at high to extremely high speeds, it will be essential to take this into account in the future." This applies, for example, to modern, high-speed bearings and transmissions in E-mobility, or to machines that grind surfaces. The now better-understood effect also plays a role in the stability of metals in a vehicle crash or in the impact of small particles on high-speed aircraft.

Our website uses cookies an integrates content from third-party providers to ensure you get the best experience on our website, for analytical purposes, to provide social media features, and for targeted advertising. This it is necessary in order to pass information on to respective service providers. If you would like additional information about cookies and content from third-party providers on this website, please see our Data protection declaration.

A Perfect Trap for Light - 26.08
This site uses cookies and analysis tools to improve the usability of the site. More information. |